It helps that it is March.  This month and next will see the height of bloom here, much like high summer in more temperate gardens.

I realize that I rarely show long views, and I admit that I'm still not quite ready to do much of that.  Most plants are still so small!  But I have included a few vignettes this month, especially of the East Border, which has been one of the most difficult areas to work out.  So, first a few vignettes, then a rather complete look at the individual plants.  Mostly pictures, I'm afraid.  Lots of them.

One area I'm particularly pleased with is the north corner of the East Border.  One of the first sections to be planted at the bottom of the garden, it has gone through many permutations and killed quite a few plants.  The effects of too-intense sunlight are compounded by heavier soil, which was compacted by construction equipment shortly after we moved in.

Now, at long last, the Willow Acacia (Acacia salicina) is big enough to provide some real relief to plants beneath it, while the Senna - apparently capable of withstanding any amount of sun and heat - supplies further shade on the east side.  As the flowers drop, this shade will decrease because the foliage is exceedingly light, but it will help even in midsummer.  Meantime, the area seems downright shady.  Nevertheless, this spot has become home to some of the most resilient of natives, as well as agaves, aloes, and cacti.

And from just around the corner, here is Aloe "Blue Elf" with Senna nemophila.

From another part of the garden, here is Freesia alba (see also my recent post) blooming between white lantana and Lavandula dentata, displaying the unescapeable fact that extra colors keep creeping inexorably into the White and Silver Garden.  The yellower freesias may well be moved as they are tipping the balance a little too far out of the monochrome scheme envisioned as consisting of cooler whites to silvery hues.

And now a tour through the various borders...

A quick look at a few other faces from the North Border... from left to right: Pelargonium hortatum, Lavandula multifida, Cerinthe major (self-seeded from last year), Catharanthus roseus, and Limonium perezii. 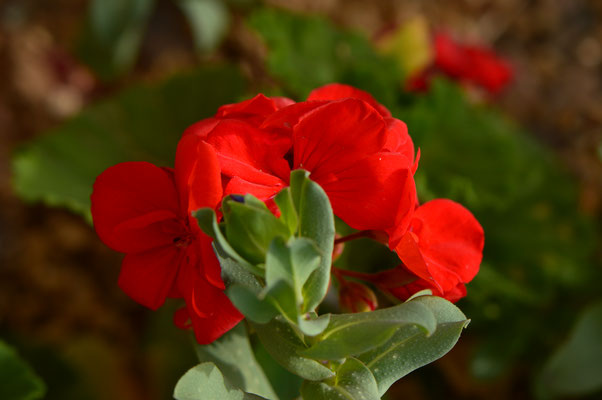 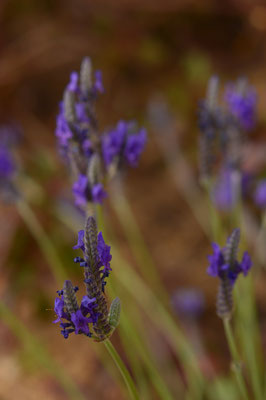 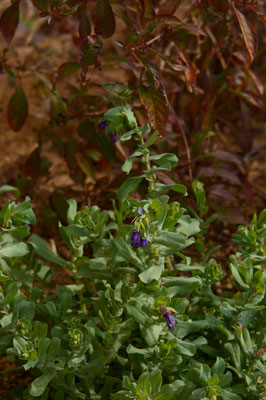 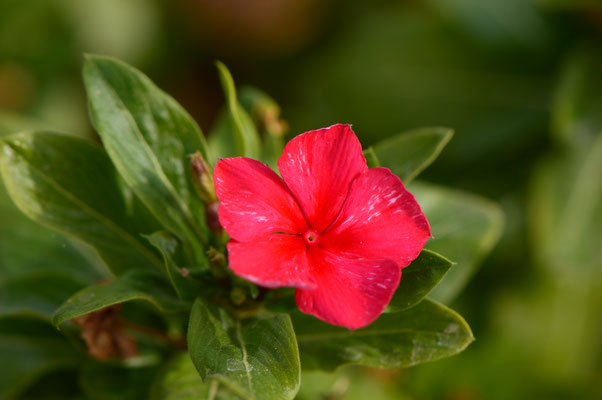 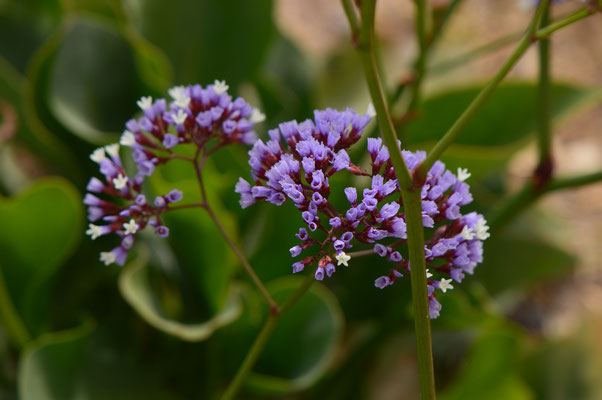 At the bottom of the border is Alyogyne huegelii.  It is flowering heavily and dropping its enormous blooms just as quickly since they do not hold more than a day or two.  The effect verges on the spectacular.

There is less actually in bloom in the Central Bed at the moment, since so many plants received significant pruning last month or early this month.  The Salvia greggi varieties have responded particularly well, and they are just coming back into flower.

Thanks to all of you for taking this March tour of the garden, and thanks to Carol for hosting Garden Bloggers' Bloom Day at May Dreams Gardens!