As this week's Tuesday View comes along, I decided to share views from around the garden.

First, the usual view down the South Border.  Looking a little lean now as the early and mid-spring flowers are gone, it is transitioning toward summer with miniature roses coming into bloom while Catharanthus roseus, the mainstay of flower color during summer, is growing out but not yet blooming.  What I have not shown is the first few flowers from sweet peas, tucked into the back of the border.  I'm not sure how much of a showing I will get from them before the heat takes them out, but at least I have a few blooms!

The lavender mini rose is a very profuse bloomer once it gets going!

Moving on from the South Border, here is the Central Bed, looking up toward the patio (see also the picture at top of this post).  Here I have tried for a distinctly cottage garden effect.  The bright orange of Hippeastrum "Naranja" competes for notice with a towering spire of hollyhock, not yet in bloom.  The deep pink hues belong to Penstemon pseudospectabilis "Coconino County" and rose "William Shakespeare 2000".

"William Shakespeare 2000" really is more crimson than shown in these photos, a good color to accent the lower corner of the bed.

The other corner is occupied by "The Alnwick Rose", all a-tumble with flowers now.  Rose "Sterling Silver" can be seen behind it.

One cluster is tumbling into iris leaves...

At the top of the bed is rose "Wollerton Old Hall", the queen of the garden.

I thought it was also time to show some pictures from the North Border as well, since despite its very unfinished state, it is beginning to fill in a little.  Here we have, clockwise from upper left, Salvia farinacea in front of tropical shrub Hamelia patens, two blooms from rose "Mister Lincoln", dwarf Callistemon citrinus "Little John" with a cane of "Mister Lincoln" lolling behind, and a noID miniature rose in front of an equally noID lavender, presumably some variety of L. stoechas. 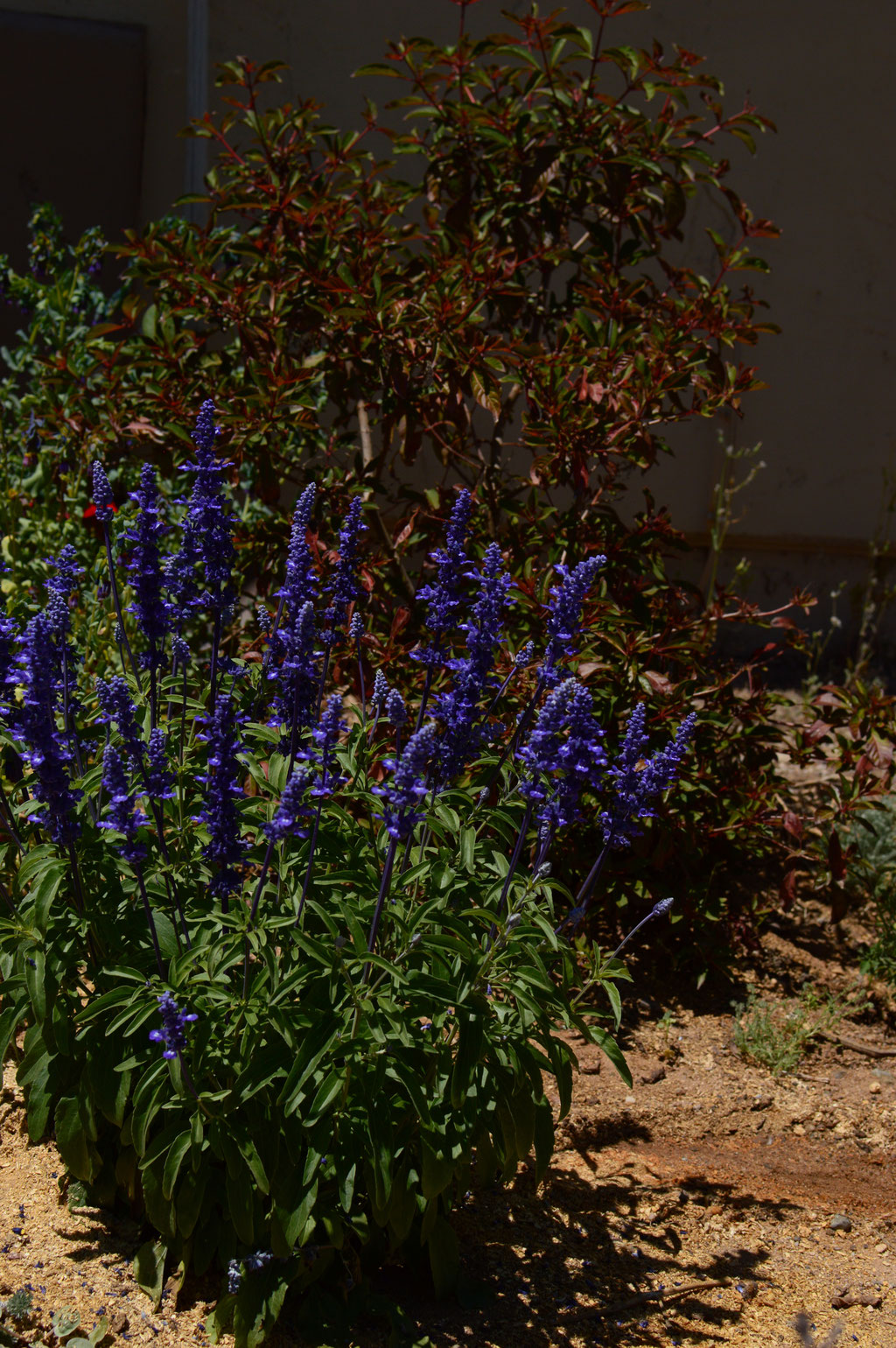 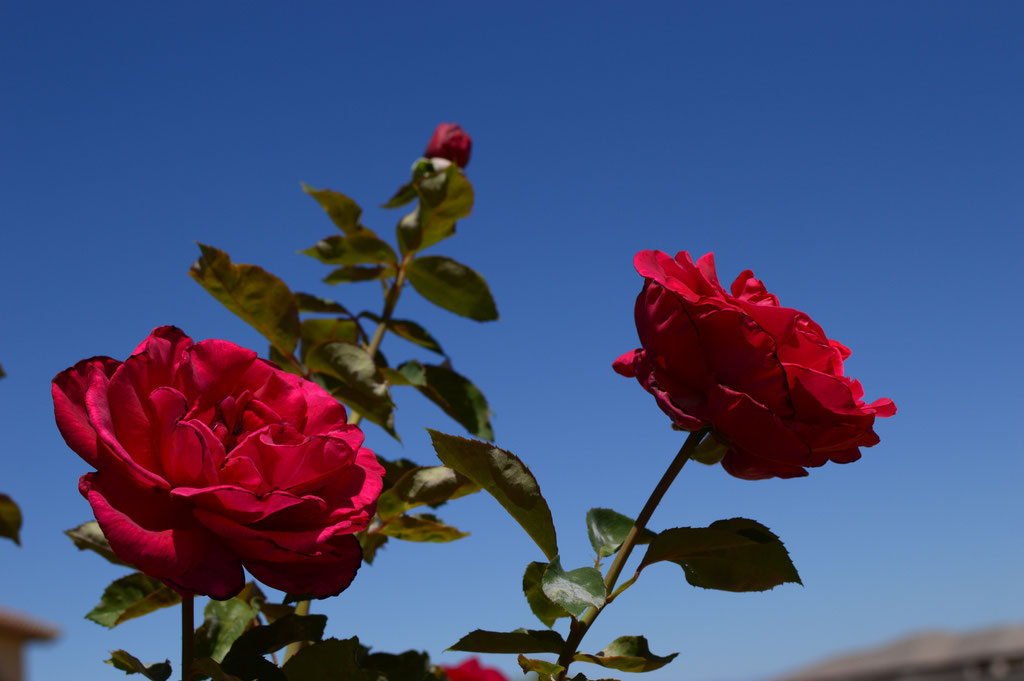 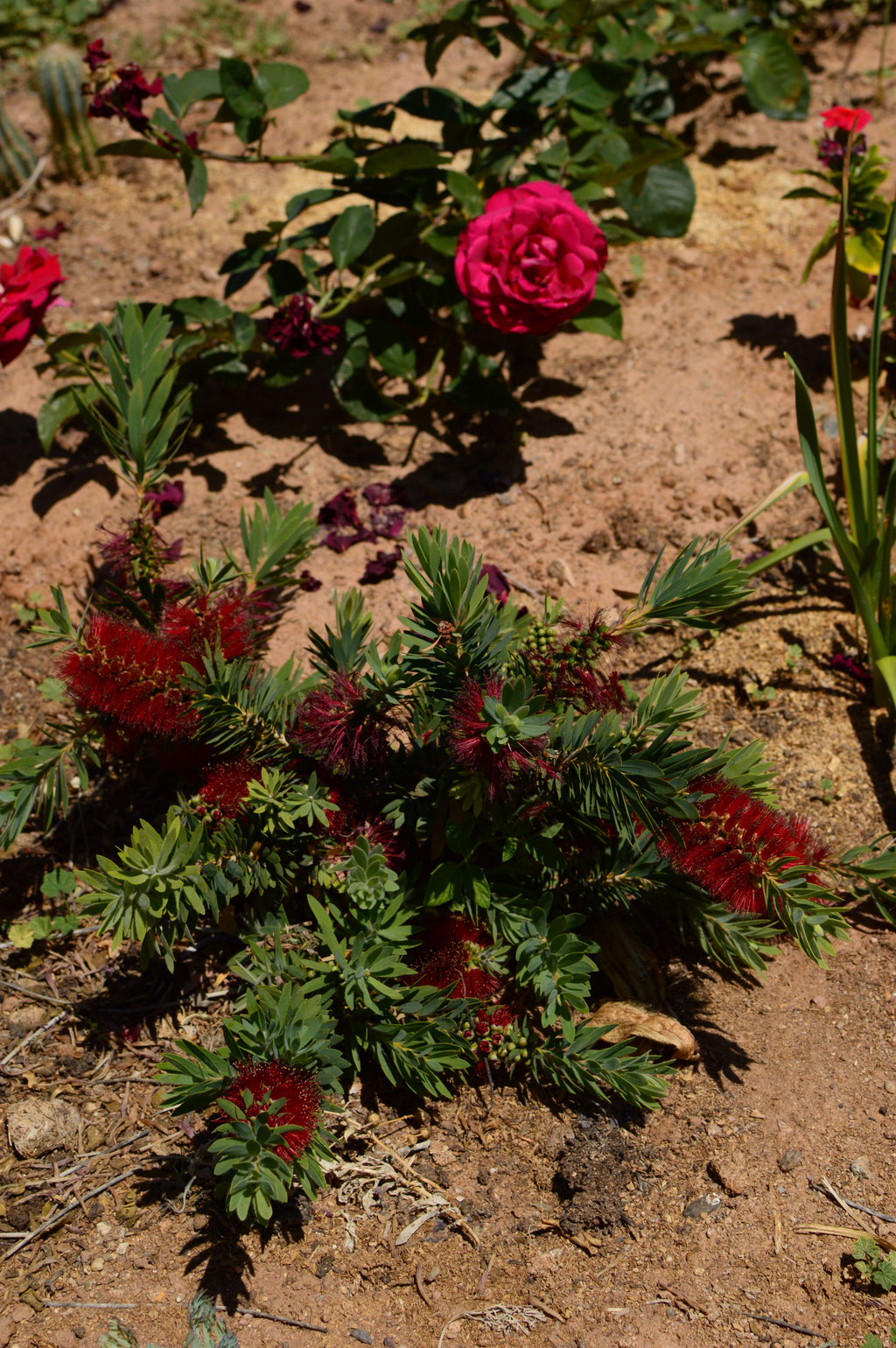 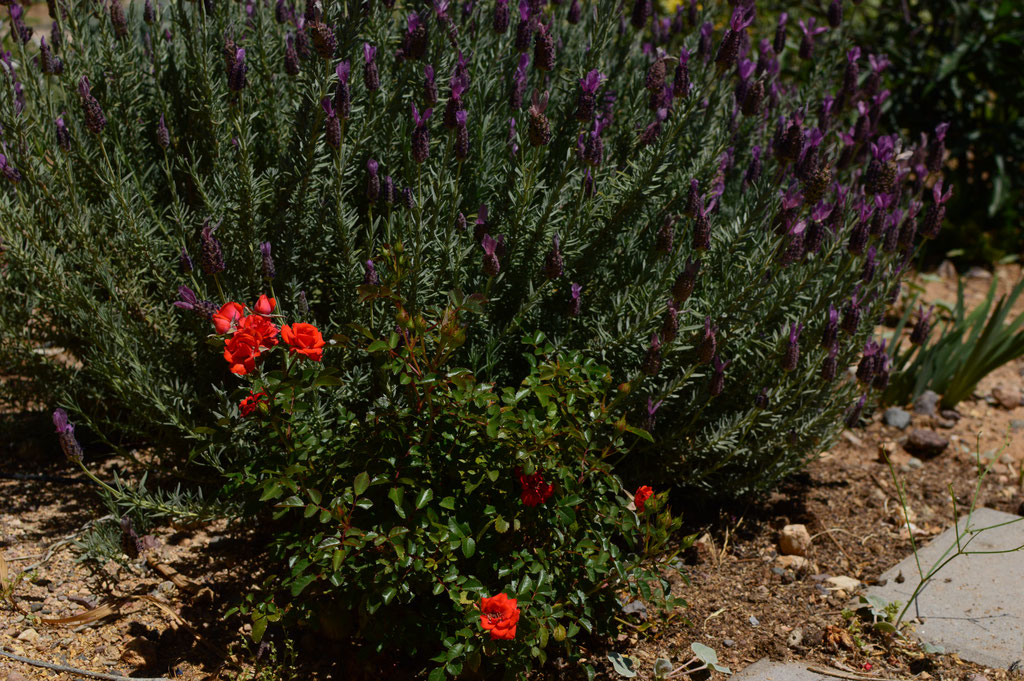 And finally, over to the Rose Border, which runs along behind the patio.  The big shrub roses are just in their first flush of bloom, some sadly marred by thrips this year.  All that winter rain does have its disadvantages.  But it's lovely to have the roses coming in.  Oddly enough, "Graham Thomas" seems less affected than some of the others.

I certainly have taken liberties with the theme, but I did want to share a few extra angles on the garden today.  Many thanks to Cathy for hosting the Tuesday View at Words and Herbs!