You may notice something unusual in a couple of this month's Bloom Day photographs: raindrops!

After a very dry winter we have had three days of slow rain, on and off, softening the garden soil and refreshing the plants as only rainwater can do.  It has been a big relief to know there is some good moisture returning to the garden and, indeed, all around for the thirsty ground.  The wild plants have gone very dry for this time of year.

So life goes on in the garden.  I've finally begun a lot of the pruning I've been meaning to do, so the borders are looking a bit lean to me; and I was wondering what this month's GBBD would show.  I need not have worried, as there is actually quite a bit in flower.

Here is a look around the borders in the middle of February.  First, the North Border, where Justicia californica is finally making its statement of brilliant color and hummingbird nectar.  This is apparently the time I am supposed to prune this overgrown, sprawling monster, but how can I...?  It will have to wait just a little longer!

But the queen of the North Border is Alyogyne huegelii, with its enormous purple-blue flowers.

Across the rest of it, there is (left to right) Lavandula multifida, Pelargonium peltatum, Lavandula x intermedia, and Salvia farinacea.  (Click on any image to view as a slide show.) 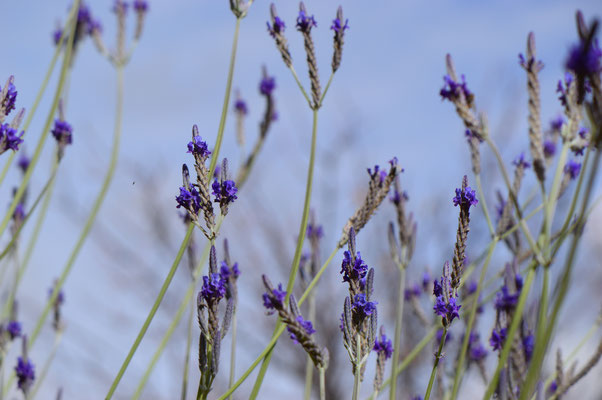 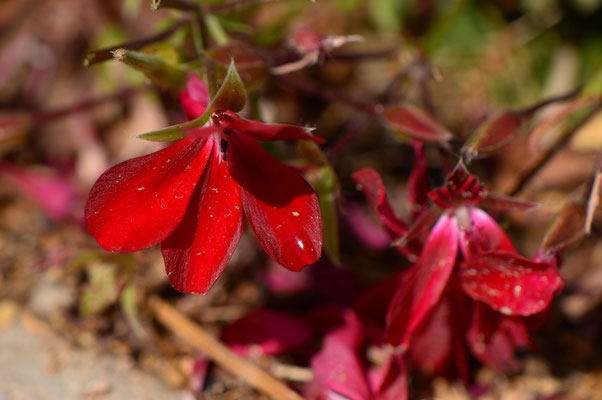 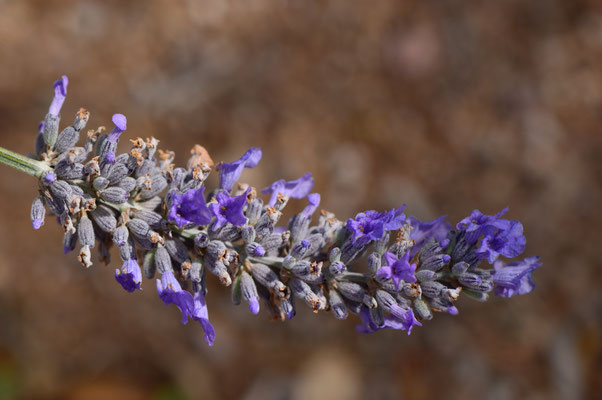 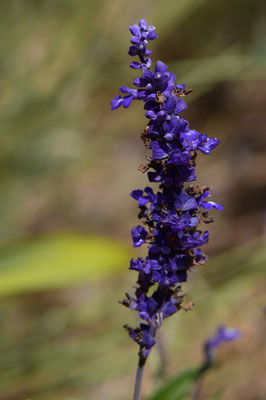 Then there is the East Border in its yellow hues.  The main show is still coming from Senna nemophila, whose pliable branches have drooped groundward with the weight of flowers and rain.  Dry, it must reach some seven feet tall now!

Below it, there has also been the surprise of late additional bloom from Narcissus 'Autumn Colors' (top left, below).  Curiously, the noID paperwhite in the South Border is also supplying an ample return of flowers.  N. x odorus (right), on the other hand, is just on schedule with its fragrant, lemon-colored blooms.  It is the best choice among species narcissus so far.  With the mild temperatures, I can hope the blooms will last a little while. 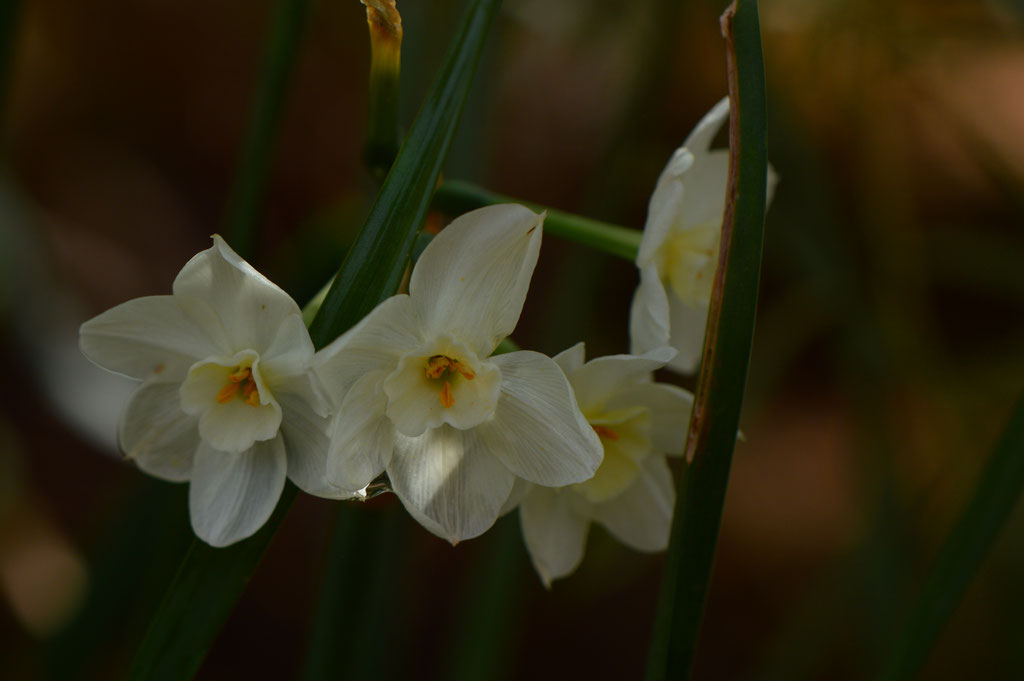 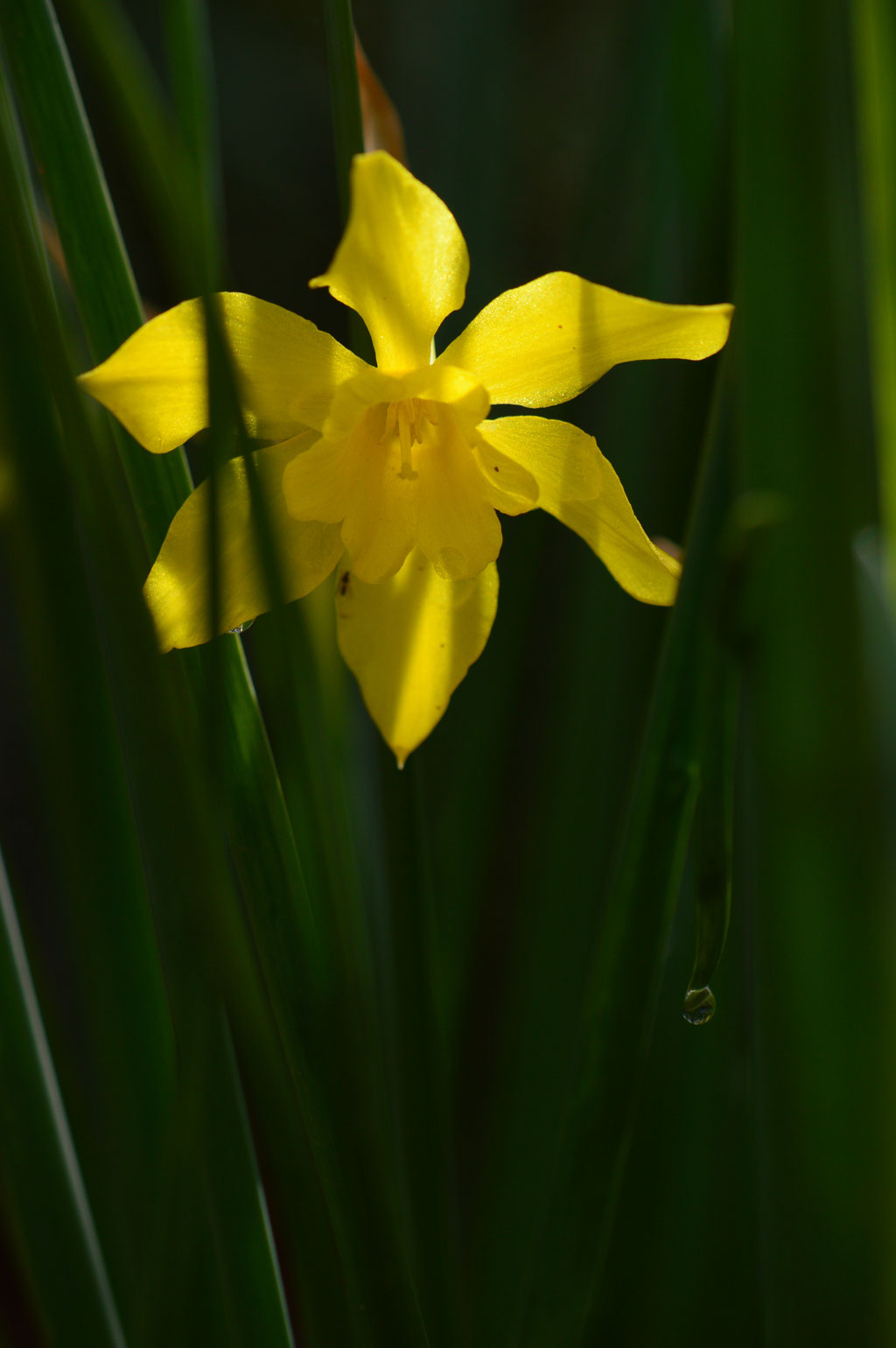 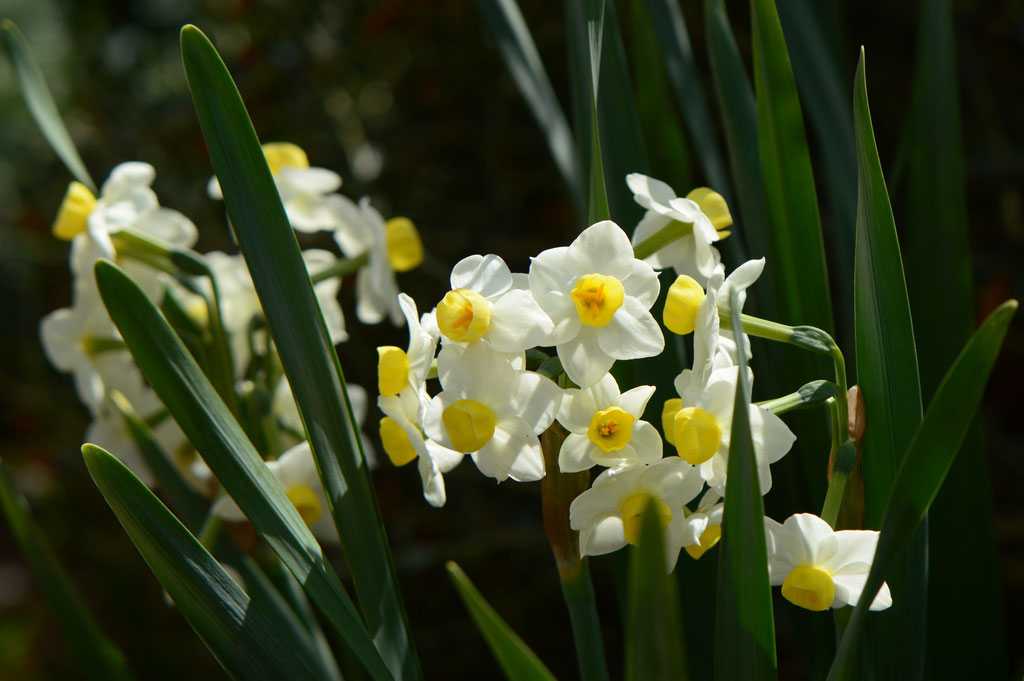 Elsewhere in the East Border: in addition to Senna nemophila, there are plenty of flowers on Tagetes x 'Gold Medal', plus the first-ever flowering of Encelia farinosa (named for the dusty color of its foliage - a vivid contrast to the brilliant golden flowers), and Justicia spicigera. 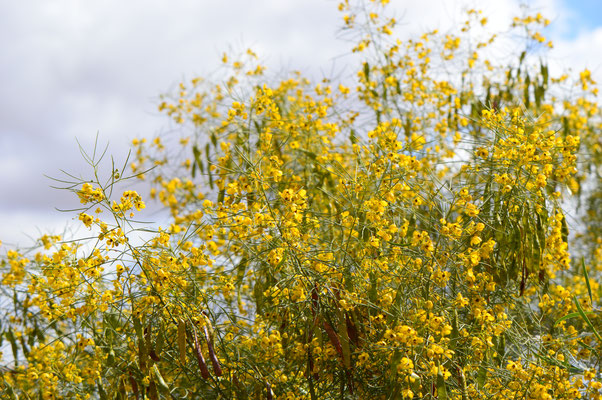 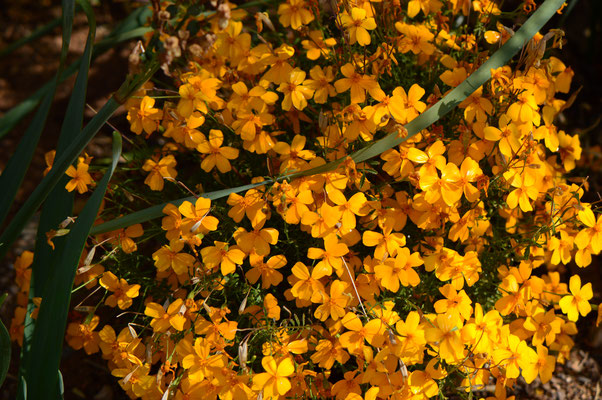 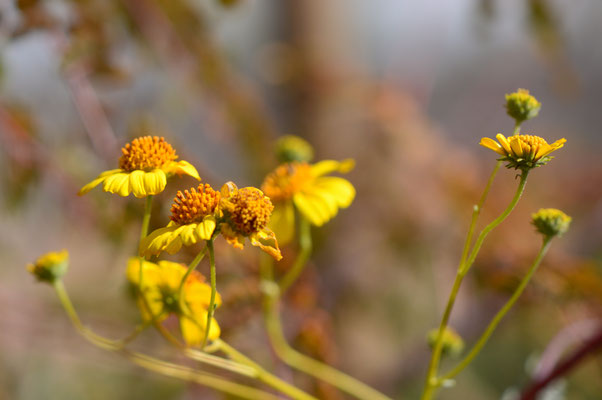 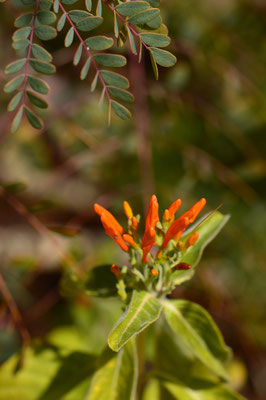 The rosemary hedge at the back of the South Border is partially in bloom, much to the satisfaction of bees.

The biggest disappointment of the month has been the scant, dried-out blooms on Eremophila maculata 'Valentine', which should be in top form right now.  I've not been sure whether this was due to a lack of water or something else.  But with the rainfalls of the last three days, it appears to be setting fresh buds.  Hopefully I will get a little bit more out of its annual showing and can then debate whether its difficulty was water shortage or lack of actual rainwater!  After all, we've had only one rainfall since last August.  The plants know the difference!

Further up the South Border there is plenty in bloom though.  The two Spanish lavenders are just opening their first flowers, and for once at the same time.  From upper left (left to right, unless you're viewing mobile, in which case you must make your best guess because the order may change!): Lavandula stoechas 'Blueberry Ruffles', miniature rose, Salvia 'Summer Jewels', L. stoechas 'Madrid', miniature rose, Eremophila hygrophana, Catharanthus roseus (I have cut back many of the Catharanthus plants throughout the garden, but I'm not done yet!), and Kalanchoe x 'Pink Butterflies'. 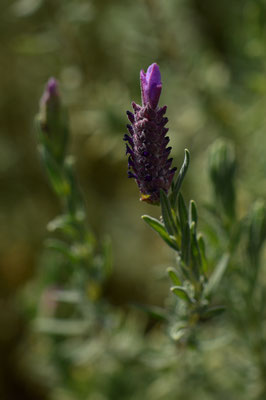 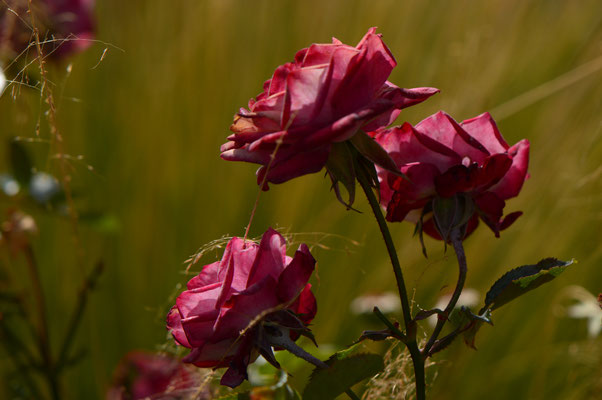 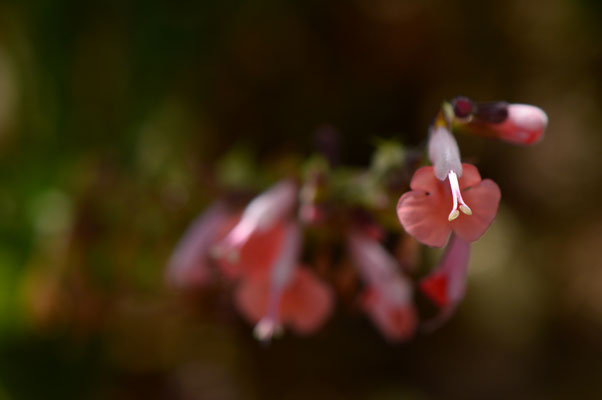 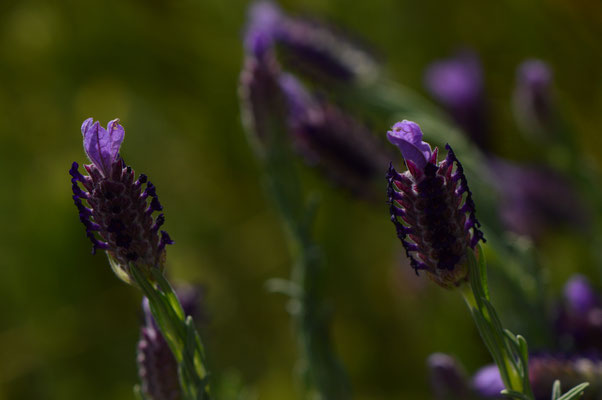 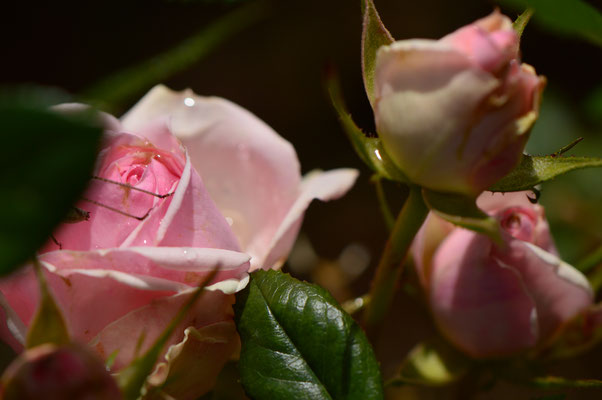 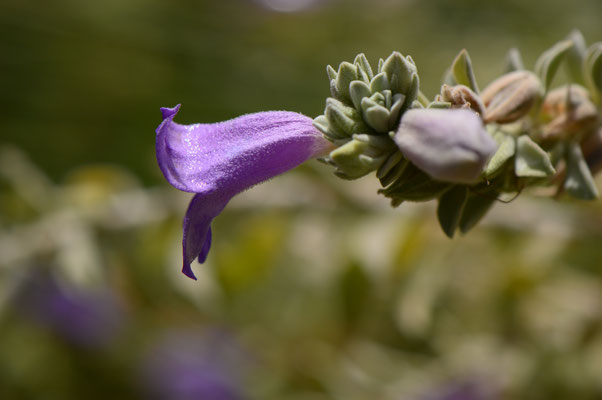 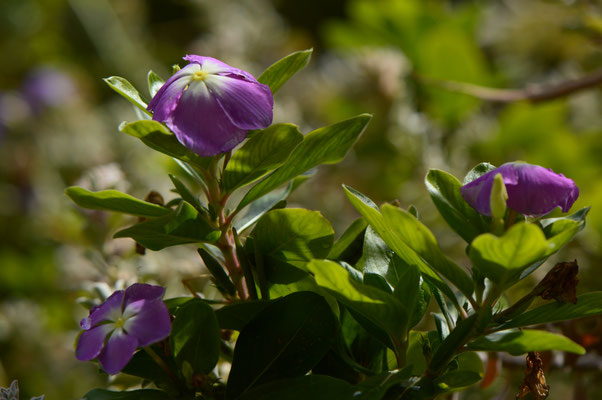 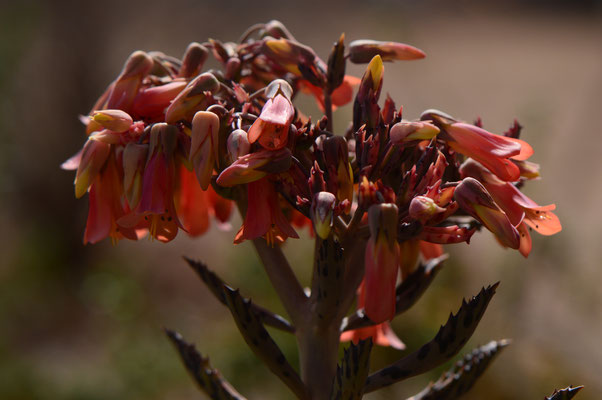 The Central Bed is a bit bare at present because, again, I've cut back many of the plants for the season.  In addition to Lavandula x 'Goodwin's Creek Gray', the best showing comes from the autumn sages (all of these in the pictures are self-sown), and there are still some bright red flowers on Russelia equisetiformis, despite a heavy trimming! 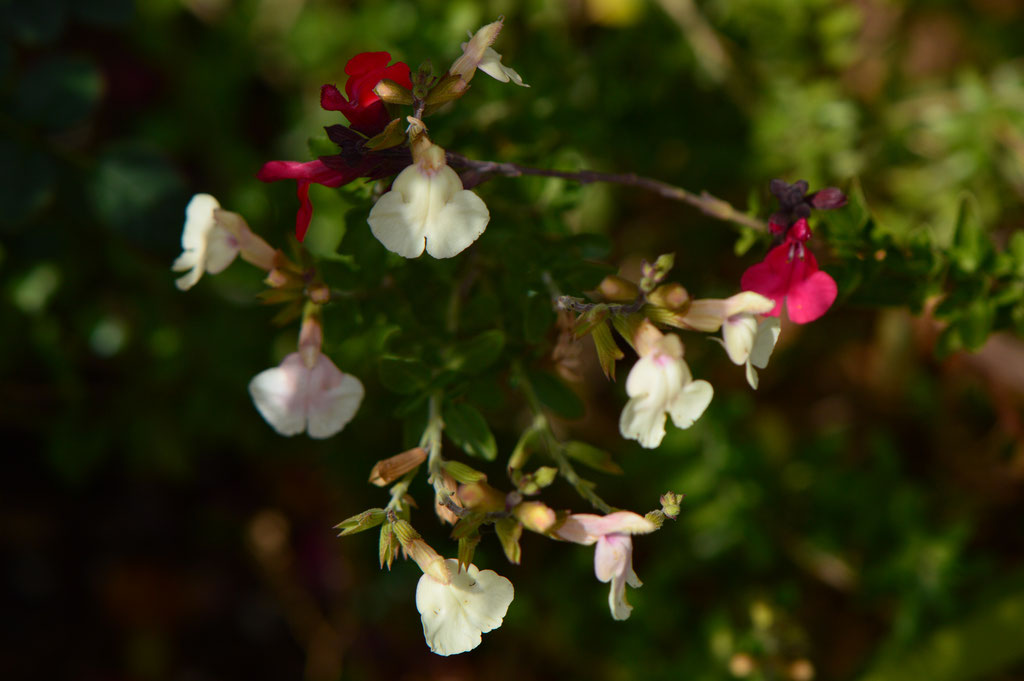 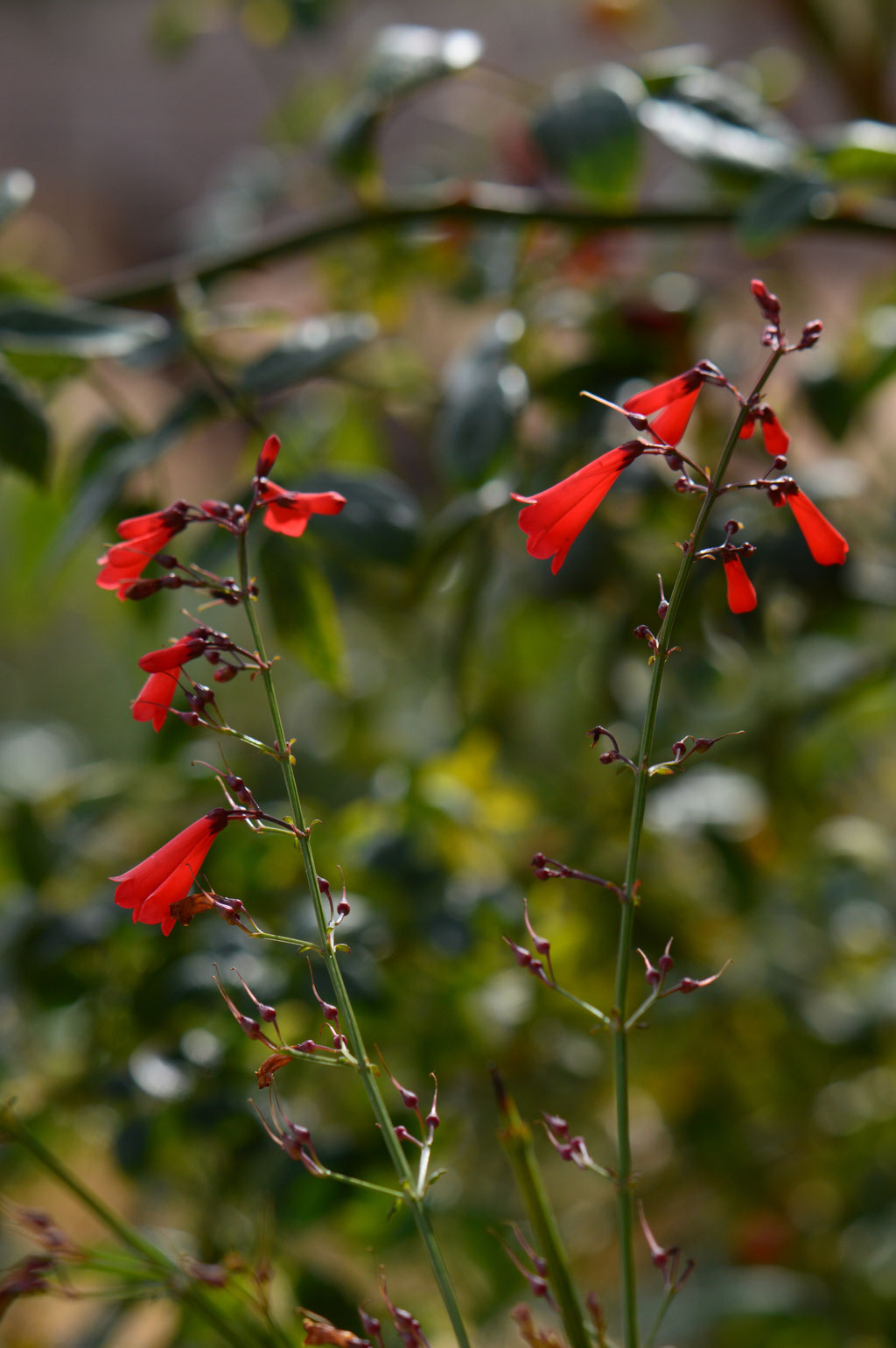 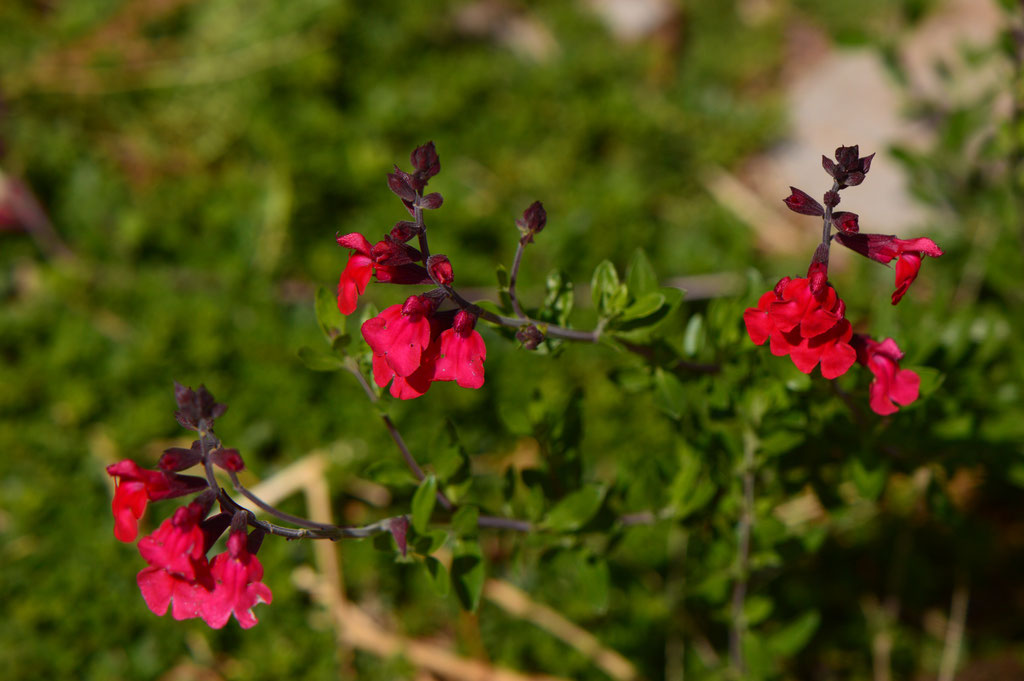 Lastly, out to the White and Silver Garden.  Mostly composed of foliage plants, it does have some bloom in February.

Thank you to Carol at May Dreams Gardens for this Garden Bloggers Bloom Day reminder that despite lots of clipping the garden is still full of flowers!

Perhaps this last picture sums up the pleasant weather best!